In this fourth chapter, we look at the Ford F150 and the findings of the teardown. 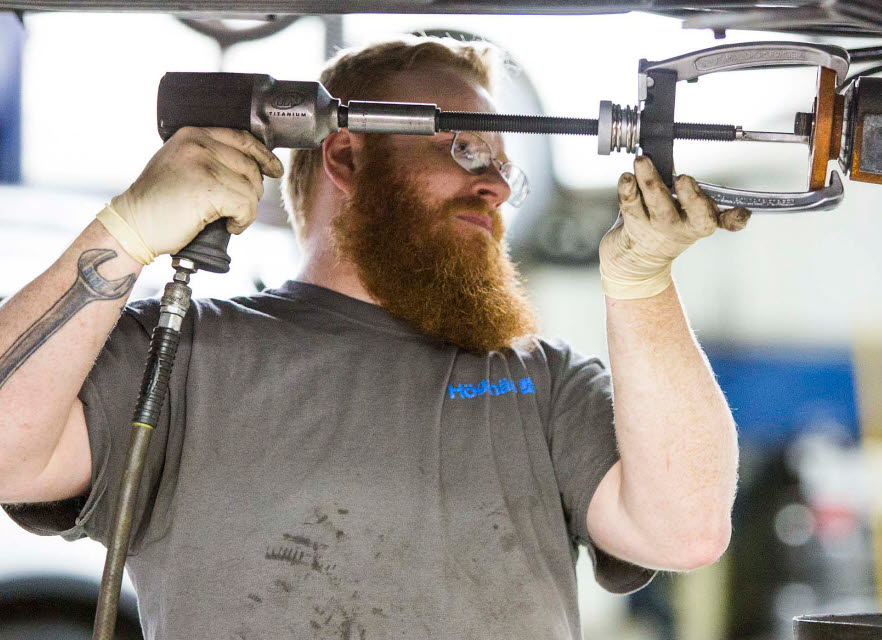 Let us start by discussing why this niche vehicle, which predominantly only exists on the US market, was of such interest in the first place. The Ford F150 can in this context, be regarded as old technology, and difficult to purchase in Europe. Therefore, the question of why this particular vehicle, was discussed many times at Höganäs. A limited number of vehicles are shipped to Europe, but they are very expensive, costing in the range of $100 000 due to taxes and import tariffs. Almost twice the price that one would pay for a Ford F150 if you bought in the US.

Personally I was not too fond of this car, I felt it did not fit in; I was more interested in getting my hands on a Chevy Volt hybrid, or a BEV, but someone with better judgement than I insisted that we should get a pick-up truck and so we did. We purchased the vehicle in the US and the teardown took place at a Ford dealership in Johnstown, Pennsylvania where we had an excellent mechanic and access to the workshop manual, which helped in documenting and naming the parts.

So why is this vehicle important to the Powder Metallurgy (PM) industry? Well, it is sold in vast numbers in the US. The top three selling cars, if you can refer to this beast as a car – more like a tank, are pick-up trucks. They are the Ford F150, Chevy Silverado and Dodge Ram. After that, comes SUVs, essentially pick-up trucks with a proper back seat(s), mixed with a few sedans. A third of all vehicles sold in the US are trucks, one-third are SUVs and one-third are regular cars and mini-vans. Because some parts are shared between trucks and SUVs, we expected the teardown results to have some validity for two-thirds of the US market. Unfortunately, the Toyotas and Hondas assembled in the US will not have more PM in them, but for two thirds of the US market there are many PM parts in cars.

The truck we got was equipped with 4WD. Not all trucks are shipped with this option. However, my guestimate from spending three years in North Carolina is that around 50% of trucks bought in the US are equipped with 4WD, give or take 10%. The reason for mentioning this is that the transfer case contains many heavy PM parts, and that leads to the slightly biased results I am about to reveal to you.

Our Ford F150 contained, drumroll please…32 kg of PM parts! The PM parts in the transfer case alone weighed 8 kg. However, this could be increased to almost 10 kg with further engineering, since there are some very suitable parts that are not in PM yet.

In comparing the Ford F150 to that of the Passat and Yaris with a mere 4.5 kg and 3.2 kg, it might be argued that the F150 is a heavier vehicle and therefore should contain more PM. However, relative to its weight, the F150 is a PM love machine. The relative weight of PM to total vehicle weight is 1.7% for the Ford, 0.2%, and 0.3% for the VW and Toyota respectively. Therefore, the VW and Toyota are not even close to that of the Ford F150.

So why is PM content so much higher in the F150? I can only speculate, but I don’t think it is because the technical level of PM is much higher or that equipment is more superior in the US PM industry. I would say that it is fairly even between the US, Europe and Japan with a little more technical advantage going to the European parts producers. However, that statement speaks against the actual results. I think it is cultural. The US mentality is more collaborative and open, one culture, one language. The interaction between the PM industry and the Auto industry is much tighter. MPIF works hard at getting the PM part producers and material producers, as an industry, into the automakers to give seminars and show case parts and technology. Recently we had 800 engineers at FCA in Auburn Hills, walk through and interact with the PM industry during a one-day exhibition. This of course leads to projects between PM part makers and system designers within FCA, Ford, or GM, where PM is incorporated in the design of subsystems. In addition, the auto industry sits in the technical meetings that the PM industry has twice a year in Detroit. The fact that the US auto industry is centered in one place, plays an important role in all of this, making it is easier for everyone to meet. The same goes for the US PM industry that has its epicenter in Pennsylvania. This also brings the part makers closer for the exchange of information or just social bonding and MPIF does a great job in making things happen within the PM community. Nevertheless, it goes two ways; MPIF could not do a good job if the PM industry did not accept the invite to dance. Disco, Slow dance or Tango, it doesn´t matter the important thing is to step up and move those feet to da beat.

In my next and final chapter from my side, I will talk about life after the current F150. What happens with PM when we crossbreed a Prius or Tesla with a pick-up truck? How much metal powders will we then have in the trucks, could it be the end for PM or just a new beginning? I know… one heck of a cliffhanger, right?