Discoloration of the base material is a common problem in brazing but easily avoidable. Discoloration stems from oxygen being present in the furnace during the high temperature portion of the brazing cycle and the issue is normally to locate the source of oxygen

There are a few common ways worth mentioning when discussing discolorations and the source of oxygen.

Some brazing filler metals are more sensitive than others to oxidation and oxidation can occur at any stage in the brazing profile as long as the temperature is high enough.

Binder burn-off oxidation is one common issue, which can happen if the temperature of the component is too high when the polymer in the binder decomposes. Binder burn-off oxidation starts becoming critical at temperatures around 600°C and over.
Höganäs brazing pastes normally contain 10% organic material and 90% metal. Out of the 10% organic material, 8% - 9,8% is solvent which should be dried off before the component is put in the furnace. The other 0,2%-2% is polymer which will decompose in the furnace in the temperature interval: 240°C-350°C.

When the polymers decompose, much of what is formed are gas byproducts such as: N2, O2 and CO. Generally speaking, an oxidizing semi-atmosphere is formed during binder burn-off.

The binder burn-off products form a semi-atmosphere around the parts which can be oxidizing if the temperature is too high. Thus, they need to be removed from the furnace before the temperature is increased. The vacuum pumps are generally sufficient enough to remove the semi-atmosphere but the process can be sped up by introducing a sufficient flow of pure process gas, such as N2.

Even if the temperature is not deliberately increased to over 600°C during binder burn-off, there is still a possibility of oxidation. Due to the inherent low heat transfer at low temperatures in a vacuum furnace, the middle of the batch may be trailing in temperature. Because of the lack of atmosphere inside the furnace, radiation is the primary way of heat transfer. The inherent issue with radiation is that the middle of the batch will be in “shade” which usually has the following effect on the temperature ramp, shown in the diagram below. The effect may be binder burn-off oxidation of the outer batch, since once the inner batch reaches burn-off temperature (300-400°C) the outer batch may have already reached a critical temperature of 600°C or over. 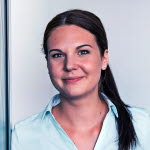