Höganäs has a track record of tearing down, redesigning and sometimes also prototyping automotive transmissions. Smart Fortwo, Rally car (Mitsubishi EVO X), and the M32 SAAB 9-5 transmission are some examples of such rebuilds. Previosuly we have reported on the teardowns of the Ford F150, VW Passat and Toyota Yaris. Now we will focus is on our recent teardown of a Chinese 4WD plug in hybrid car – the BYD Tang. 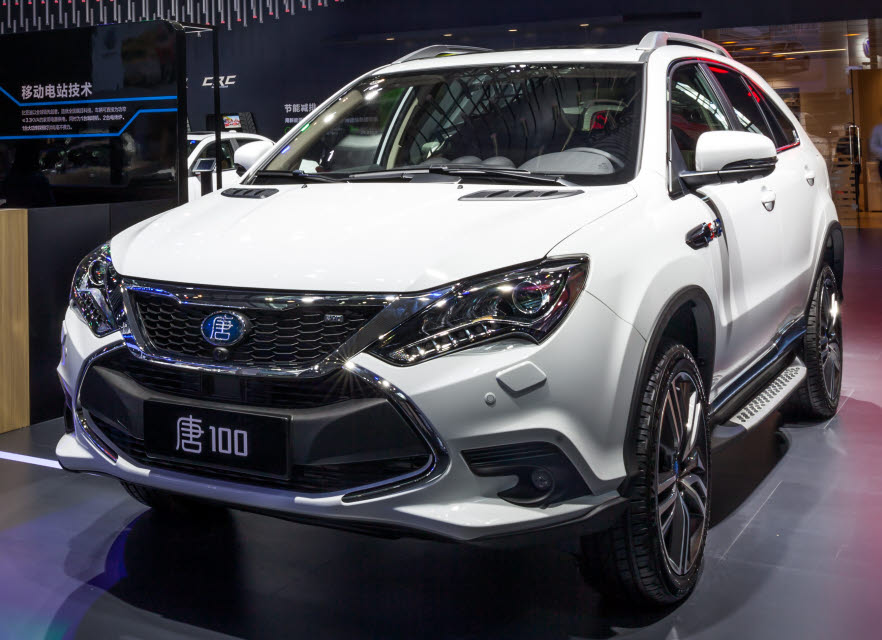 The underlying reason for doing teardowns is to help us to understand how metal powders are used in different vehicles and different markets, and for us to uncover additional metal powder opportunities.  Furthermore, we also want to uncover automotive parts that were previously produced with metal powders but are not any longer.

Results from our previous teardowns have been varied. The Ford 4WD F150 contained around 32 kg of metal powder components, while the Toyota Yaris contained 3.2 kg, a factor of 10 less. The weight relation is 2.,200 kg to 1.,160 kg, less than a factor of two.  One could conclude that the Ford, a large part of US car production, are pro metal powders, more so than the Japanese auto makers, however more data is needed to fully support such a claim.

Components in the driveline (figure 1)

As can be seen in figure 1, the BYD Tang has a complex driveline, with two electric motors and one ICE (internal combustion engine) that is integrated. The Volvo XC90 for instance, has one rear axle E-motor and one transversally mounted front ICE, with no E-machine on the front axle.

The teardown took place in Shanghai, with Höganäs engineers and workshop technicians dismantling and documenting the process and parts. A database was compiled together with a Prezi file, containing data and pictures of the parts for later analysis and show casing. Weights, dimensions, and materials of the mechanical parts of the car were all recorded.  Non-relevant parts like bumpers and fenders were not accounted for. However, E-machines, inductors, coated parts, and brazed parts were recorded, since these are all relevant in the powder metallurgy (PM) industry.

The whole process took four days and the car was not reassembled afterwards. During previous tear downs there were great difficulties in reassembling hybrid vehicles and making them functional again. In fact, the VW vehicle that we tore down could not be reassembled, despite involvement from VW.

We were able to get the Toyota Yaris working again, but this was after much difficulty and involvement from Toyota master mechanics. Given the complex nature of the BYD Tang, it was decided to not even attempt a rebuild.

The overall PM penetration in the BYD Tang is higher than the Toyota and VW Passat. In relative terms, the penetration is 0.3 % or 7.8 kg out of 2,390 kg curb weight. See figure 2. 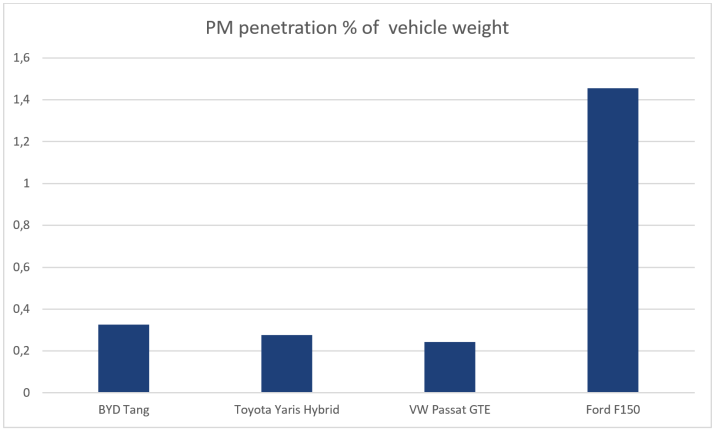 Most of the PM found in the BYD Tang was in the engine and transmission in the form of a VVT system, valve guides, synchronizer hubs and a number of pumps containing PM parts. Also worth mentioning is the use of an Eaton differential with automatic lock-up that contained a number of PM parts, all assembled into a very ingenious design. The electric power steering also contains a number of PM parts adding up to a kilogram of weight. The weight distribution of PM parts within different subsystems is presented in Figure 3. From figure 3, it can be seen that more than 5 kg (65 %) of the total 7.8 kg of PM found in the BYD Tang is used in the engine and transmission.

It is relatively easy to tell if a part is suitable for PM manufacturing (with or without some design modifications) but it is very hard to tell if a part will be cost effective or not. It depends on many factors, which differ between manufacturers and users.

There were also parts found that traditionally were made from PM, but for some reason, this was not the case in the BYD Tang. An example of this is the seat adjuster gear, and the integrated crankshaft bearing, shown in Figure 4.

Crankshaft bearings are an important PM part and contribute significantly to the total PM in a vehicle, with several hundred grams of PM being used in a four or five cylinder engine. As a reference, a bearing cap in the V6 in the Ford F150 weighs 1.1 kg. 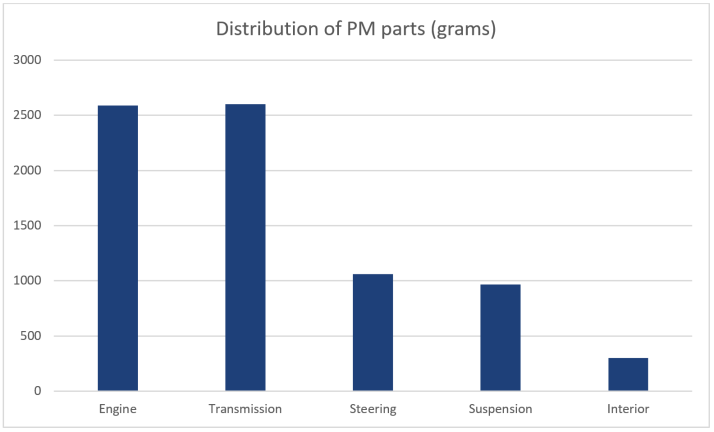 Figure 3: Illustration of where the PM parts sits in the BYD Tang.

During the different teardown processes, potential candidates for PM were identified and documented. Business case analyses for these parts have been established to sift out the most interesting opportunities. The DCT transmission is a treasure chest of opportunities – see figure 5.

There are not many PM parts in the DCT transmission, but lots of steel parts that are potential candidates. The gears are standing out, literally, but also synchronizer sleeves (>1kg).

There is already 1.1 kg of PM synchronizer hubs in the transmission, but one hub is still not converted. The total gear mass including synchronizer teeth is close to 20 kg. Not all of the gears are good candidates for PM. For instance, the big ring gear attached to the differential cage requires a very big press and some of the gears are cut on the shafts, which makes conversion less straight forward. However, from a manufacturing point of view, approximately 12 kg of gears could be good candidates. The transmission has not been reverse-engineered for stress analysis so the exact process routes for each gear have not been defined.  However, the potential for PM conversion is very real.

Besides the gears, there are more than 8kg of other parts. The bulk of these parts are made out of two differential cages, and one (not converted) synchronized hub mentioned above.

Differential cages may not be a common powder metal part but could be constructed out of four PM parts using three different tools. The benefit would be lower weight, less machining, higher rigidity and most likely lower costs. Höganäs has made an in-depth design study of this together with Alvier PM Technology and KBE+, where the current design in the Toyota Yaris Hybrid was digitized and benchmarked against the PM design developed by Alvier, Höganäs and KBE+. See figure 6. 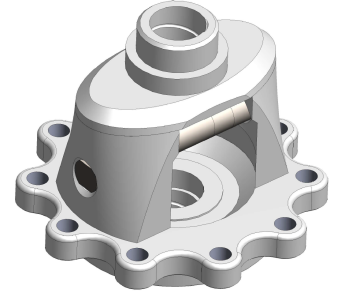 Figure 6: Example of Differential cage from 4 PM parts. Shaft is still made of conventional steel.

In this type of vehicles with differentials on both front and rear axle the total weight of differential cages is more than 8 kg. The differential cage is also a component that will be in any vehicle regardless of the type of driveline (battery, combustion, hybrids etc).

In the combustion engine, there are several good candidates such as the connecting rods (4x691 grams) and three balancer shaft gears, weighing a total of 1.1 kg. In addition, the E-machines could have been made using soft magnetic composite (SMC) powder. The exact amount needed to replace the steel is unknown since the motors have not been redesigned but a reasonable guestimate is 4-6 kg in each of them.

A Chinese hybrid vehicle, the BYD Tang, was torn down for an analysis of current PM parts, as well as for future possibilities to convert parts from solid steel to powder steel. It was found that the PM penetration in this vehicle is slightly higher, relative to its weight, than that of the Toyota Yaris and the VW Passat GTE, but significantly lower than what was found in the Ford F150.

There are plenty of opportunities for conversion and increased PM content in the BYD Tang. The majority of PM found was in the Transmission where many of the gears are good candidates for conversion. The engine could potentially hold another 3.5 kg in gears and connecting rods and the E-machines, if made with SMC technology, could contain another 10 kg. 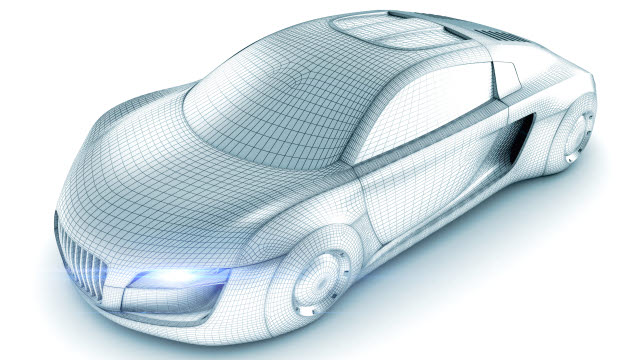 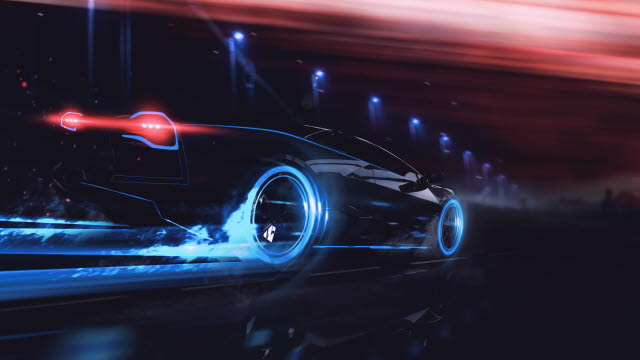